We berthed at The Marina at around 5:30pm being eaten alive by mozzies as we did so! Once settled it was a mad dash to locate all the window mozzie screens and get them installed so we could open some windows to eat comfortably downstairs. We had some of the fish we caught that afternoon prepared as sashimi, ably served by sushi master Pete. It was washed down with our bottle of champagne we had saved to celebrate rounding Fraser Island! After dinner, we talked a little about what to do the next day and made a to do list, then headed to bed as we were still pretty tired from our disturbed night at Sandy Cape.

We woke to beautiful blue sky, warm sun and zero wind, so went and treated ourselves to breakfast at the cafe, while we firmed up the days plans. We decided to do another night here, hire a car for the arvo and do the Distillery tour so Pete could finally get to see it, and do a little provisioning on the way home from that. So car booked for 11, we headed back to get the jobs done. Pete loctited the anchor swivel and filled the chip in the bow, and other random filling jobs. I paid my tax, checked the autohelm attachment to the quadrant and checked for provisions. I also completed the mozzie screen in our cabin as well as attempting to create a screen for the port over the Galley. This has yet to be perfected!

We headed into town at about midday, visiting the cooperage first, where we picked up some BBQ smoking chips (rum flavour of course!) then to the distillery for the 1 o’clock tour. I enjoyed it the second time around, and Pete loved it. We of course enjoyed the tasting at the end, and came away with another 3 bottles of Royal Liquour (diamonds for Sandy-Bob!) and a super special bottle of their top rum to ensure our cellar is adequately stocked for the next few months.

We returned home via the IGA at Burnett Heads and picked up some odds and ends, Then finished up a few jobs before having a sunset drink of our distillery purchases. As we were settling in to enjoy, the skipper from the South Passage, moored outside us, came over for a chat, as he remembered us from Airlie and Maggie last year, where he had also been sailing. We had a great talk, he skippers for a living but is based in Cairns, and said we should look him up when we get up that way. He had some great experience across the top of Australia and Indonesia, and was more than willing to share. We will definitely be in touch with him later in the trip.

We cooked dinner that evening in the “Cruisers Corner”‘ a kind of camp kitchen area with a BBQ, fridge, sink, tables and chairs etc. Someone had obviously done this before and we found a mozzie coil set up using a fork as a stand! Great idea and one I am taking away with me! Pete cooked up brilliant fajitas on the BBQ and we finished off the bottle of red we had started the previous evening. As we headed back to the boat, an extremely heavy dew had fallen, but the clear sky showed a million sparkling stars as though they were lodged in black velvet. There is little ambient light here to obscure the night sky.

In the morning we woke to fog! We had heard South Passage head off around 6am and roused ourselves shortly after. We had refuelled and packed up, checked out of the marina and were on our way at 9, heading back for another look at Fraser. Plan is for an overnight at Platypus Bay, then probably head back to Bundy tomorrow on the Easterly or Southeasterly breeze, and settle in with full boat covers to ride out the rain! 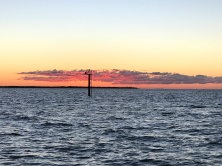 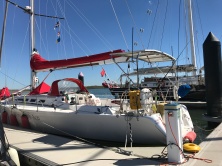 Parked next to South Passage

At the tasting session 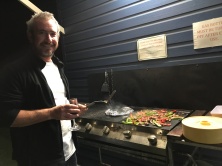