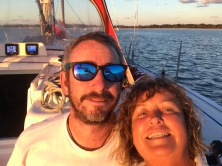 As planned we departed Port of Bundaberg Marina around 9 am having filled with diesel. As we exited the heads and entered the shipping fairway, contrary to the forecast there was a 10 knot south easterly blowing, which of course was exactly where we wanted to head! We played around with the waypoints a bit, but ended up just going for the shortest course, powering into the breeze. Eventually the forecast prevailed and after some light stuff, the easterly filled in. We set the stay sail and motor sailed at about 6.5 knots and settled in for the day.

The cloud cover dissipated, leaving a gorgeous blue sky again, though it was marginally cooler than it had been. Pete didn’t even get the sluggos out! Whilst he fished all the way across Hervey Bay, there was no sign of interest in the line. Maybe it was the bait that discouraged the fish – they don’t like mackerel tuna any more than humans!

Even though we didn’t catch fish we had turtle sightings and dolphins 🐬. No matter what weather conditions you are in or how many dolphins there are, they just make you you smile! The first time we crossed Hervey Bay, with Clare in Pilgrim, we saw no wildlife at all. We had expected the famous Hervey Bay to be simply brimming with whales and dolphins as all the brochures said, but we saw none at all. This time we seem to have had more luck, though we have not been inundated.

Our planned destination was Lagoon Anchorage, about half way along Platypus Bay on Fraser Island, and as it was about 50 miles from Bundy, it took us most of the day to get there, motoring as 6.5 knots. However, as a bonus we arrived around 5 pm, just in time to anchor and settle in to watch another cracking sunset. We had a curious turtle pop his head up to watch with us, plus a couple of dolphins checking us out! As darkness fell, the stars came out, and with the complete lack of ambient light the sky was brim full of stars. The Milky Way stood out clearly and we could even see the different colours of other stars. It was glorious. Whilst not quite warm enough for dinner on deck, Pete BBQd the steak, and we ate below. A couple of hands of our new favourite pastime, gin rummy with a cup of tea and some Easter chocolate (yes, it’s still going!), then a relatively late night for us at 9:30!

As forecast the weather changed overnight and we had some rain, and we got up to overcast with some threatening clouds in the distance. Whilst the breeze had been gentle, it started to get up around 20 knots, but this soon died back to less than 10, and a weak sun tried to push through the cloud cover. As the rain was holding off we decided to tackle the top job on the days list first, and that was to give Pete a haircut. Out came the clippers, the milk crate and a cushion and in a jiffy, Pete was looking a lot less craggy! He also trimmed his facial hair, further improving the look. We had a swim to get rid of the clippings, and found the water incredibly clear and a pleasant temperature.

After breakfast we went to explore the lagoon as we could see at least one mast inside. The Goon Bag did a great job of getting us over some shallow patches and we landed on the beach inside to have a little walk and check out Wine-Dark Sea from the land. She looked a long way off, but had another yacht for company! This was a different aspect of Fraser Island than Sandy Cape. Here the sand is bright white and the scenery low mangroves and coastal lagoons. More fishing boats than 4WD vehicles here and plenty of fish and stingrays in the lagoon. Despite the overcast day, it was pleasant to walk about and see the different scenery, and have a zoom about in the The Goon Bag!

Returning to the boat, we did a couple more jobs, had lunch, then Pete prepared pasta for dinner. We had brought the pasta machine, but I wasn’t sure Pete would use it, but he was keen to do so, and we had tagliatelle hanging from the hand rails of the saloon, while I prepared the pumpkin, thyme and burnt butter to go with it. For the rest of the afternoon Pete fished with some success, catching 3 smallish fish. We used both the fish book and the Queensland fishing app to try to identify them, but not with great success. Our best guess is that they were some kind of whiting, but they had features of various fish in the book and didn’t look exactly like any of the pictures! We didn’t keep them as we wouldn’t be eating them immediately, so they got a second chance of life! As dusk fell, the sky seemed to get more overcast, and we had no sunset to speak of. However it stayed warm and dry enough for us to have dinner on deck, which was most enjoyable. The pasta was fantastic and certainly one we will make again, and we had poached pears for desert, using up fresh items that were beginning to be much less fresh! 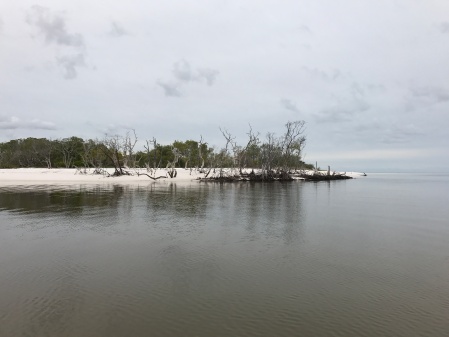 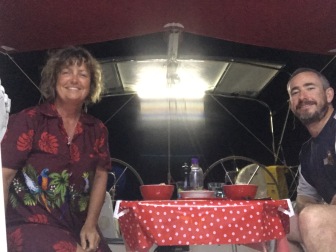 Overnight the promised rain came in, now and again with a puff more breeze, and Friday dawned grey and rainy, as the forecast had promised. It was a day for baking and chores. I made lime curd, to use up some of the thousands of limes we seem to have aboard, as well as meringues, to use the egg whites left from the curd. Lime curd was a resounding success, but the meringues were a little sticky. Still they made a fab lime Eton Mess after dinner, when broken and mixed with cream and lime curd! Pete fished during the day and caught some hideous looking thing we think was a toad fish, but at dusk he again managed to catch the fish we presumed to be whiting. We were going to have it for dinner so he was able to land and keep it, but of course only managed to get one before they stopped biting. Still we had a little fillet each with our, cauliflower, kale and chorizo bake!

Rain continued through the night, and we had a breeze and tide change around 3am which woke us both and late to a late wake up, but morning brought a clearer sky, though still overcast, with the promise of later clearing. We decided to head north again, and see if we could score the right conditions for Lady Musgrave. 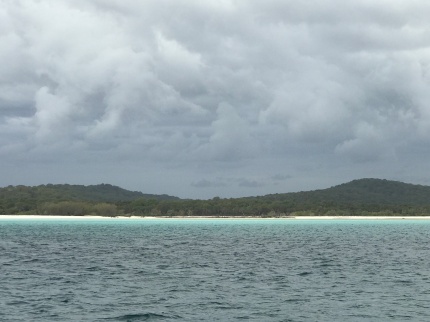 The water is so green