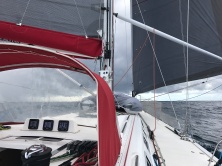 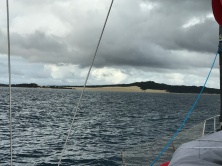 Departing Mooloolaba on a cloudy and cool morning, we were not terribly enthusiastic about the next leg. It would be at least a 24 run to get us around Fraser Island, and we had softened with a week in port! However, we cleared the entry without any problem, having accounted for the shoaling, and pointed north into a grey sea with periodic whitecaps. As forecast we had around 15-17 knots from the southeast, and we still had a fair swell, though much less of a secondary swell at least. We put up the main with one reef, and then got the heady out, and settled in to about 8 knots over the ground. Our anticipated arrival at the Breaksea Spit mark, the most northerly part of Fraser Island we had to round was 0900, exactly 24 hours ahead.

Shortly after settling in to sail, one of those “blackies” crept over us and dumped a massive amount of rain in a very short period. It was so wet, and of course coming from behind, that we had to put washboards in to maintain semblance of dry down below. The wind, however, dropped during the downpour, though it soon came back once the rain eased off. Eventually, the sun came out and we were able to dry everything, but we could still see lines of “blackies” all over the horizon out to sea, so we figured we were definitely in for more.

Whenever I got on the helm, I seemed to be the bringer of either rain or no wind. As the day progressed, every time I was on the wheel, the wind got lighter, until I had to put the sails away completely and turn on the motor. Without sails, the motion of the boat is not as good, and this was unpleasant for a while, but gradually the breeze came back as we approached an extremely evil looking cloud, with just the headsail set. It wasn’t even black, but oddly yellow, though it didn’t seem to have any rain in it. As the wind increased quickly from about 5 knots to 15, I called Pete on deck to have his help in case we needed to ditch the sail quickly, but the wind got to about 22 knots, then gradually eased back to a comfortable 15 again. We kept going with just the headsail, as it was starting to get dark, and it would be easier with just one sail if we got similar squalls during the night.

After dinner of boeuf bourginon, we started watches, with Pete on for the first 3 hours. When I got up for my watch at 9, he had had a lovely moonlit watch with good breeze, poled out heady and the autohelm steering comfortably the whole time. As I took over of course, there were dark clouds flirting with the horizon, and the breeze started to become fickle. I had to furl the heady, put the pole away, then unfurl on the other tack. Then the wind disappeared and I had to motor. Then the wind came back, but almost upwind and then it rained! Finally I think the breeze settled in from the southeast at about 12 knots with the moon out again for my handover to Pete at midnight!

Again, he had a dry comfortable watch, though he did have to do some motoring, but when I resumed at 3 am we were again sailing, but not for long. Despite changing into my heavy jacket for what looked like was going to be a downpour, I had no rain on my watch leading into dawn, and when I emerged from my deep sleep at 9am, there was the Breaksea Spit buoy on out port bow about 2 miles off. The sun was shining, it was warm, and felt like it was going to be a sparkler of a day. At this point we needed to decide if we were going to head for Bundaberg or Lady Musgrave Island. It was a difficult call, with both at 50 miles away, arrival time was going to be around 6pm which meant dark and low tide. We discussed various options and decided that both destinations were unfeasible for the evening arrival. Pete said he had never set foot on Fraser Island, (and neither had I), and it seemed a pity to keep heading north when we were at Fraser. A quick check of Lucas showed that anchoring at Sandy Cape or Platypus Bay were both good options, and would allow us to get ashore. So we decided to make Fraser Island our friend and head in to Sandy Cape for an overnight anchorage. Of course this meant heading into the wind, and whilst we did half heartedly sail upwind for a while, we ended up putting the donk on and motoring the last 10 miles.

The cruising guide indicated that it could be bit swell prone in the location we had chosen, because it was in effect at the very top of the Island, where the huge Breaksea Spit starts. This means that the tide flows fast through the small gap between the island and the Spit, and this is where we were anchoring. However the breeze was light, so we hoped any swell would be minimal. As we approached the beach, there was not another boat in sight, but about 10 4WD vehicles parked on the beach. We wondered if they would be camping there and hoped not! Pete prepared to anchor and I steered the boat in to our intended spot and then we dropped anchor in about 7 m of water. Just we we were holding nicely and Pete went to set the snubber, he swore loudly and went white. As I got to the bow he showed me the nut that holds the swivel shackle to the anchor. It had inexplicably unscrewed itself. Engine back on, line ready to grab the anchor if it hadn’t come off the chain already, I did a super quick plot on the iPad, thankfully open on the iNavX program, in case we had to dive for it, then we started retrieval. Unbelievably, the anchor came up with the chain, though it was hanging on by a thread. Pete managed to get a line around it and get it on board before we lost it, though he berated himself for chipping the hull when desperately trying to get the anchor in. I was thankful it was back on board, chips to the hull or not! Once we had taken a deep breath, re-attached the swivel and double checked it, we had a second, more successful go at anchoring, and this time succeeded with no further excitement!

We were settled by about 3pm, so decided to head in to the beach for a look around, and so we could finally say we had walked on the worlds largest sand Island. We launched The Goon Bag and headed to the beach to see what all the 4WD were doing. Turns out they were all doing the lighthouse walk! As we landed, some were taking off back up the beach while others were returning to their cars. One guy told us he liked the name of our dinghy! Gradually they all left, so we checked out the area, but as the midges were closing in for evening, we decided to return in the morning and walk up to the lighthouse. For now we were happy to be in such an isolated location – no other boats, cars or people around.

We returned to the boat and had a shower, and some dinner and reflected on the fact that we had finally stopped to admire Fraser Island, instead of treating it like a huge obstacle! Yes, it’s a long way to sail around it when you want to go north, or it’s a stressful trip through the shallows, but it’s also a world heritage area, and worth visiting. After a disturbed night due to the swell which Lucas so sagely warned of, we woke early as we no longer had the dingy blocking the light out in our bedroom! We had a quick breakfast and coffee, then headed into the beach, deserted this morning. It was a steep 1.2 kilometre walk up to the lighthouse, but passing some incredible scenery. Hard to fathom that this massive area is all sand when you see the amount of vegetation there is, though the clear areas of sand which peak out like hilltop beaches are amazing and disconcerting. At the lighthouse there were a number of huts and someone living in – I think they are rangers – but he came over for a chat, and asked if we were from the boat.

We managed to get a few texts and Facebook posts at the top, as we finally had mobile reception again, and of course there was a quick chance to check the weather forecast. Heading back down, Pete decided to run up one of the massive dunes fronting the beach, before we relaunched The Goon Bag to return to WDS. The westerly had kicked in while we were up the hill and it was lumpy and unpleasant on the anchor, so we prepared for a quick get away. The forecast promised more from the west and southwest for the rest of the day and into tomorrow, so our plans had to change. We had hoped to explore Platypus Bay and maybe head down to North White Cliffs in the Sandy Strait, but the forecast meant this whole stretch would be a lee shore, though light winds. We therefore decided to head to Bundaberg for the night, and then reassess from there. The weather was a little unpredictable with an east coast low affecting northern NSW and giving us non south easterly breeze, so we thought we should take the chance to explore areas we may not otherwise get to. From Bundaberg, we can still head back into Hervey Bay, head out to Lady Musgrave or head north to Pancake Creek.

We set off for Bundy motoring directly into the wind with a nasty short swell bashing us about, but by about midday the breeze had dropped to almost nothing and the sea was glassy. We coasted along comfortably, Pete fishing and me relaxing. We decided to try out the number 5, as we had not yet put it up and it seemed sensible to try it out in easy conditions. As we were setting it, Pete yelled “Shit” and dashed to the stern. As he grabbed the fishing rod, I realised he had hooked a fish, so calmly went about assisting! As we got the fish aboard and were debating its type and if it was big enough to keep, it managed to wriggle free of the hook and jump back in the water! We thought it was a mackerel tuna. As soon as we had settled down after that excitement, the reel squealed again, but this one was bigger. Pete managed to get him in and I gaffed him aboard, and we identified him as another mackerel tuna, so good sashimi for dinner tonight. Shortly after, we called Bundaberg Port Marina and got a berth for the night. Whilst it’s a bit sad to be in another marina, on this part of the coast we are a bit limited unless it’s blowing SE. However, Bundy is a favourite spot, so very happy to be heading back there – hopefully Pete gets to see the distillery this time!

Start of the trail to Sandy Cape lighthouse 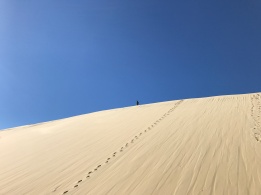 Pete at the top of a huge Fraser Island dune