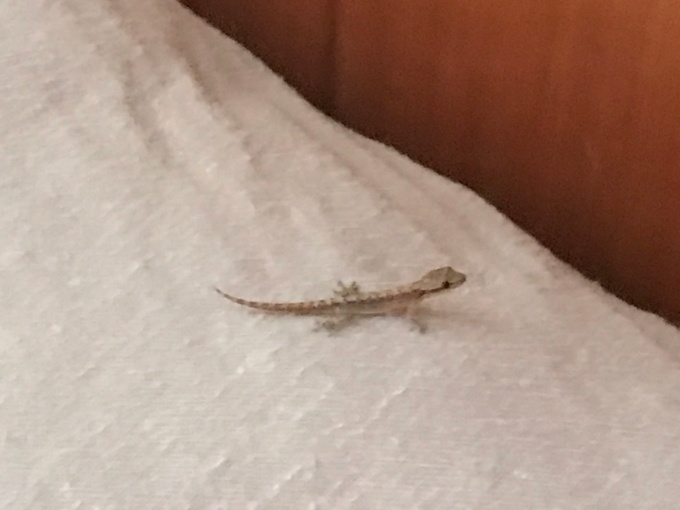 After the exchange of lures and beers, we headed back to sea on a glorious sunshine day with a sea breeze starting to come in. By midday we were cracking on under heady and full main, reaching comfortably at 8 knots. We all settled into a comfortable spot to watch the blue, sparkling seas slip by, making good use of the bean bags. After lunch we started to pass the first rocky outcrops of the Palm Isles approaches, and we could make out the details of the wooded shores of Great Palm Island.

As Fran headed downstairs to grab a camera, she shouted up to let us know Gordon the Gecko had reappeared! This was interesting as he was last spotted near Cruising Basil and the Dill, in the dodger. I popped down to see where he was, and there he was relaxing on Choppa’s pillow in the cabin! There followed a short escapade of trying to encourage Gordon back outdoors, but he was very quick for a tiny fellow. I did eventually get him into the cockpit, but at the loss of his tail, which continued to wriggle independently for a good 10 minutes!🦎 We last spotted him on the cockpit jackstays, so we have no idea where he will next turn up.

We pulled into North East Bay around 1500, after considering whether or not we were comfortable to anchor on a lee shore. Given we were in an 8-10 knot sea breeze, likely to drop as the sun set, with a variable forecast for the morning, as well as a low barometer, we figured it was probably ok! It was quite beautiful, with just one other boat in sight, though a good two miles away. Steep wooded hills ran down to a pristine sand beach, which was deserted. Fran and Pete went into the beach for a swim and to scale the fish for dinner, while I had a half hour nap, and Choppa kept an eye on the boat. We had defrosted the red throat emperor that Al had given us at Maggie, and we had that for dinner (skilfully descaled by Fran and Pete!) on the BBQ with butter and lemon, and a risotto of mushrooms and leeks. 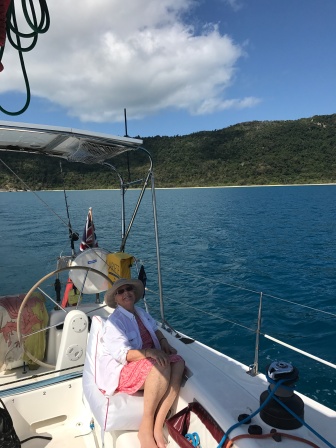 Fran relaxing in the bean bags 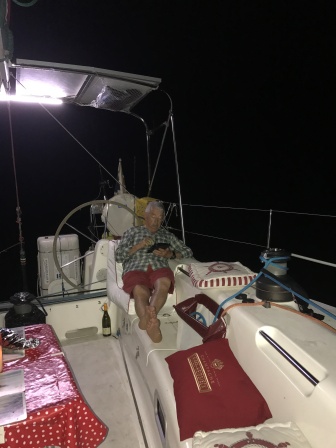 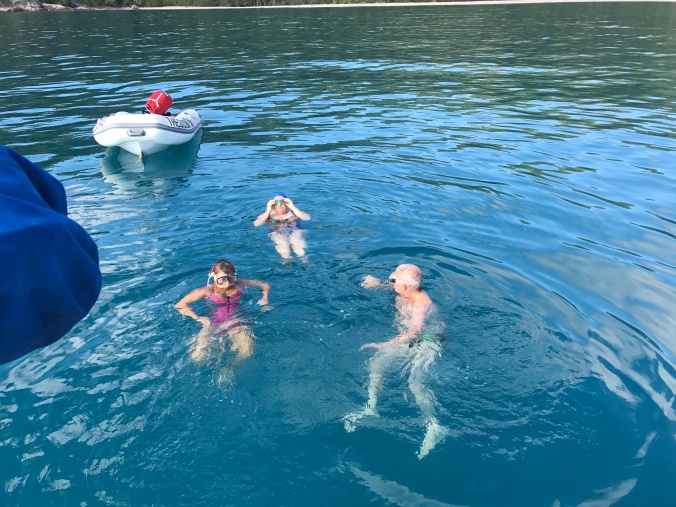 It was a gorgeous evening, very still, bright stars and Milky Way and lovely for dinner on deck, despite the heavy dew. We hadn’t put the awning up, so retired below for tea, and I had an early night while Pete taught Fran and Chop to play cribbage. We all slept a lot better than the previous night, despite a persistent swell giving us some rock and roll, and we woke to a sparkling morning, with the water looking so clear we all swam before breakfast. Pete even did an 8 meter free dive with his new fins, which made it look effortless. He will always be able to check the anchor now! After breakfast, we packed up and got ready to raise the anchor, to head to our next destination, Orpheus Island, via the Caliope Channel between Great Palm and Curacao island.

With no breeze, we motored gently, but heard a noisy clang after we had been going about 10 minutes. We stopped the engine, Pete dived in to check the prop, but couldn’t see anything untoward. After restarting the engine, it sounded slightly different, but seemed ok. Both Pete and I continued to listen out for unusual sounds from the prop, concerned that we may no longer be attuned to the usual noises from the engine. However, conditions were quite benign, and we all enjoyed the scenery as we motored up the eastern shore of Great Palm, looking for the passage through to the west shore and to take us to Orpheus. We passed through the Calliope Chanel at full ebb on spring tide with a good 3 knots of current against us, but in the very light conditions, it wasnt uncomfortable, and we had plenty of time to look at the lovely scenery of high wooded hills falling to the turquoise sea. As we came through to Challenger Bay, it was like sailing on a lake, the sea so flat and almost surrounded by land, with the various islands all around, and the mainland clear in the near distance.

We rounded the southern tip of Fantome Island, and turned north towards Orpheus and our intended destination of Little Pioneer Bay. The pretty scenery continued with so many deserted sandy beaches skirting the green islands, alternating with the bright green of mangroves. As we entered Pioneer Bay, the research centre of James Cook University came into view and we all agreed it would be a pretty good place to do a uni course! We kept standing on past the research station into Little Pioneer Bay, where there were a number of public moorings. We picked up the last mooring, noting that two of the moorings were taken up by De Le Mer, Mike and Barbara who we had met in Brampton, and Miramar, who we had seen in a lot of anchorages up the coast, but had last chatted to at Hammo, while we were picking up Row for Al and Larissas wedding.

After settling on the mooring and having lunch, we launched Goon Bag and went snorkeling to look for the hundreds of giant clams. Where we thought this was, the snorkeling was fantastic, but we only saw two or three giant clams, no sign of the hundreds we had been promised. There was a huge variety of coral and tons of fish, with very good visibility, similar to the Capricornia Cays. After a good 40 minutes, we finally decided we needed to stop, and all agreed it was the best snorkel so far. Returning to WDS, we spent the evening on deck, taking in the lovely sunset, and revelling in the tranquility. Choppa sighted Gordon again, this time back with the plants, rather than in a cabin! Needless to say we had a very calm night in this incredibly sheltered area, and all slept like babies.

Pete had called the JCU research centre the day before, to see if it was possible to visit and we had been requested to come in at 9 in the morning. So after breakfast and a quick swim, we headed off to see what the students do in that fantastic location. We were met on the beach by Ashton Gainsford, the Station Manager, who gave us a tour of the facility and talked about the types of coral and sea life that we had seen locally. It was a lovely hour, and so interesting to hear Ashton talking of the local underwater life that we had been watching as we snorkeled. As we were leaving, we checked with Ashton about the supposed location of the hundreds of giant clams, and she pointed us where to go, which was further north than we had looked yesterday. We thanked her for her time, and then headed off to go for another snorkel.

Once again, despite the most comprehensive directions, we could only see one or two giant clams on their own. We even spread out far and wide, but none of us could see anything that may be considered a plethora of clams. We did however see lots of the smaller, boring clams, that wriggle their way into an old bommie and so all you can see are their brightly coloured lips showing at the surface. The visibility wasnt quite as good as yesterday, and we decided to give up on the tale of the hundreds of giant clams, and head for Hinchinbrook, that had been looming in the distance for the last two days. 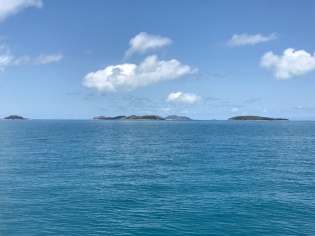 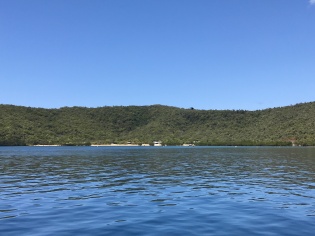 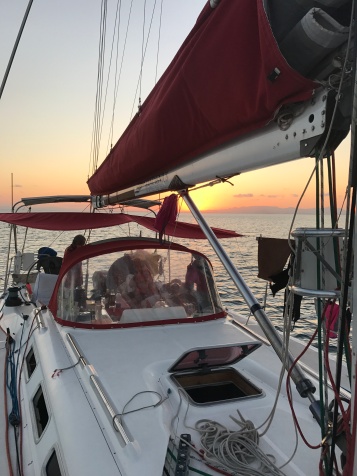 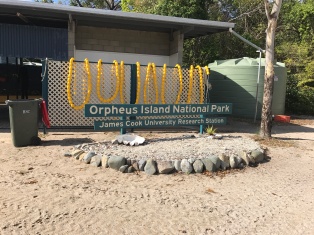 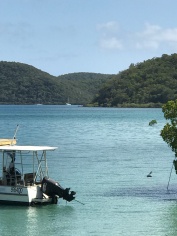 Nice view from the Research lab! 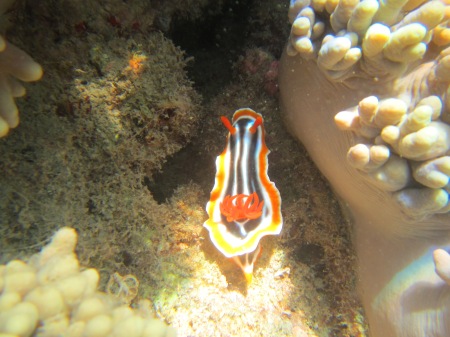 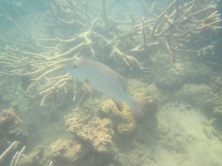 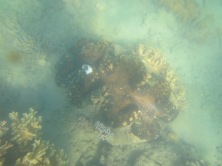 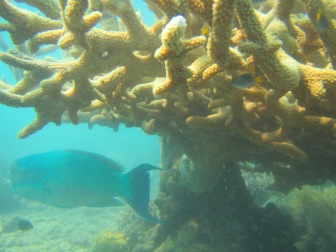 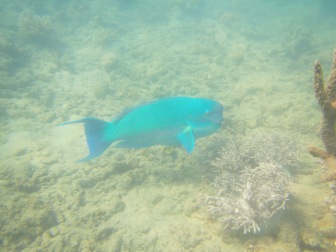