From Orpheus, we motor sailed the 15 miles north to Zoe Bay on the eastern coast of Hinchinbrook Island. I had wanted to try the Hinchinbrook Channel, but we now knew that we simply couldnt enter the Lucinda side of the channel, as it was too shallow. Everyone had said we should visit Zoe Bay, though, and with such benign weather conditions forecast for the next few days, we decided it was perfect timing to see this place that everyone was raving about.

We anchored in the northern corner of Zoe Bay, to try to get out of the low swell as much as possible. With the light NE breeze blowing, it held us bow to the light swell for the afternoon, but of course as it dropped overnight, we rocked and rolled our way through the night! That afternoon, we decided to simply get some jobs done on board, and do the walk to the falls in the morning. Pete therefore started to pull the stove apart as the large burner had been troubling us for some time.

Before we had arrived at Maggie, I had had some issues lighting the large burner, as it wouldnt stay lit. Pete seemed to be able to do it without any problem so we assumed it was technique. As this is the most often used burner, it began to give us grief and got worse as we departed Maggie with Fran and Choppa. Whilst Pete and Choppa could get the burner alight at first, by the time we arrived at Zoe Bay and were trying to make a cup of tea, no one could keep it alight. We resorted to using the small burner and waiting a long time for the kettle to boil!

So Pete spent the afternoon taking the whole thing apart, without being able to find an issue and without having fixed the problem. However, once it was all back together, we could smell gas, so it all had to come apart again. Over this period we had started cooking dinner on the BBQ, so we had an irate Pete (because he hates being unable to fix stuff!), getting angry with the stove, a stripped thread in one of the screws holding the cooktop on, and a very grumpy Sarah trying to get some dinner on the table amid the chaos and trying to help Pete! Eventually the gas leak seemed to be fixed, the cooktop was back together, and we managed to eat a very nice dinner, but we decided to get someone to look at the stupid thing in Cairns, as it would be challenging to manage with just a single burner.  We now have two major items to be looked over at Cairns – with the engine noise also unresolved, that needs a professional.

We woke to another beautiful morning, and after a quick breakfast, we launched Goon Bag and headed to the southern creek of Zoe Bay to do the walk to the falls. We could see the top of the falls from where we were anchored, and had heard that the best part of the walk was to the very top, where you could look over the falls and down into the bay. However, we were unprepared for the reality of the vista and location. Landing in the creek, there were about six other boats, all fishing craft, already beached. We knew some were camping, but had no idea there were so many others here! We found the start of the walk with a croc warning sign, as well as directions to the falls, so we set off quickly, away from the water and possible crocs!

It was a fairly straightforward walk to the large pool at the base of falls, and this was really beautiful. A deep, completely clear pool, surrounded by rock and greenery, with a waterfall plunging into it. Fran and Choppa decided to stop here and swim, while Pete and I pushed on to the top, which we had been told not to miss. The walk became a climb and at one point a rope helped you up an almost vertical section, but it was well worth the climb. At the top, a number of shallow pools punctuated the short waterfalls and made for a series of lovely dipping pools with a view out over the whole of Zoe Bay, and in the distance, Wine=Dark Sea, sitting quietly at anchor. Pete and took photos, played in the pools to cool down from the climb, and finally retraced our steps to join Fran and Chop at the base of the falls, in the deep pool.

We swam to the fall and tried to hold ourselves near it, and watched the jungle perch swimming below. Many of the fishing families had also made their way here and the younger ones were making use of a rope swing to launch themselves into the pool. It really was an idyllic location and lovely to be able to swim without the worry of crocodiles! Eventually, we made our way back to the beach, and headed back to WDS, to continue our adventure, this time out to Britomart Reef. 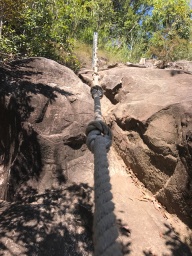 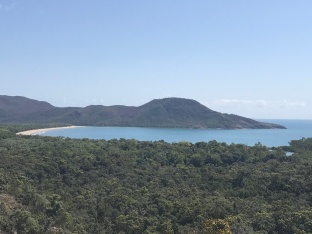 Zoe Bay, WDS in the distance 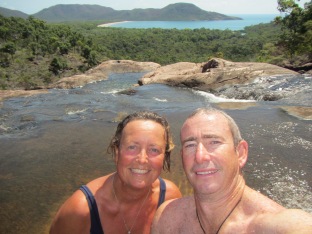 Looking down on the base pool

Fran and Choppa enjoying the cool and quiet