We had hoped to have a short stopover at Airlie Beach, but it became 3 nights because we really wanted to stock up with fruit and veg from the market. As this only happens on Saturday, we had to stay until then. However, as a bonus, we were moored beside our Sister Ship, Never a Dull Moment, and had a quick catch up with Colin and Denise, her owners as they arrived on Saturday morning to take possession from their delivery crew.

After three nights of the luxury of eating out, and a little too much imbibing on Friday night, we had a very early start on Saturday to get to the market by 7:30 am. Once we had all the fruit and veg, it was back to the marina for the courtesy car to pick up fresh dairy and meat from the local mall. It was a mad rush to get everything stowed so we could get out of the pen by midday, but we managed it, glad to be heading back to the quieter and more sedate island life we have been used to. We had a lovely sail over towards Hook Island, and managed to pick up a mooring there around 3 pm, which meant we could overnight there. The rules are generally that you should have no more than 2 hours on a public mooring between 7 am and 5 pm. If you are on the mooring at 3 pm though, its usually ok to overnight on it, provided the conditions are favourable for the area.

Of course as soon as we were settling in, thinking it was going to be a return to peace and quiet after the bustle of the marina, a backpacker trip boat picked up the mooring next to us and blared out party music for the evening. We retired below to have dinner and feeling exhausted after the days labours (not to mention hangovers!), we headed to bed early. I slept very well for the initial part of the night, then was disturbed when Pete got up. We could hear the mooring buoy knocking against the hull, and I thought it was just that the wind had died and it had nudged up to the bow. When Pete went on deck to check it though, he was concerned it may wrap around the keel. He monitored it for a good hour until it seemed to free itself as the tide turned, then came back to bed.

happy to be back at sea

We were up around 8, ready to head over to see if we could find a mooring in Blue Pearl Bay, Hayman Island. We snorkeled there a few years ago and had found it to be some of the best snorkeling in the area, and were hoping it may still be as good. It is notoriously difficult to get a mooring, and generally pretty deep to anchor, so not great for overnighting on an anchor. However, our luck was in, with all the overnight boats heading off around 9, and we picked up a mooring with ease. Actually, “ease” may not be entirely true. The public moorings are all pretty heavy duty, and are generally designed to accommodate the biggest boats. The hawse lines on them are so thick we cannot get them on our cleats, and they are very long, made to reach up the bow of big power cruisers. We had to find a way to secure this oversized line to our bow cleats, which meant adding our own smaller line to ensure the huge hawse line stayed on board.

Once we had sorted this out, we went for a snorkel, but the tide was still quite high, and as it was approaching spring tides, the fast moving current meant poor visibility. However, we were appalled at the state of the coral, which was almost non existent compared to our last visit here. Clearly the Cyclone had caused more than the foliage stripping at ground level. We returned to the boat for a cuppa and to wait for the tide to drop further and had another snorkel then. Despite the masses of fish, and a little coral regeneration, it was still incredibly disappointing. We were very pleased we had taken the time to look at the southern reef when we did.

Returning to WDS, the mooring buoy was again alongside, and Pete was more concerned this time as we seemed to be facing a different direction from all the other moored boats. He interrupted lunch to jump in and check what was happening and came back aboard white. He said we had an issue that needed to be sorted straight away, as the mooring ground tackle had wrapped itself behind the keel. Motoring off was out of the question, and just dropping the mooring wouldn’t help. We quickly got the diving gear out and ready, and Pete went down with a small line, to pull the ground tackle below the keel to free it up. However, in the wrap, the ground tackle line had taken a big chunk out of the trailing edge of our keel, and this would need to be fixed – which meant a lift out.

It was Sunday, so we knew we wouldn’t have much response from marinas or insurers, but we immediately emailed the insurers with pictures of the damage, so we could hopefully talk to them in the morning. We shortened up the hawse line to keep the buoy closer to the boat and put a safety line on to it to try to prevent any further issues. This seemed to do the trick, and we tried to relax into the afternoon, when we were bombarded with more backpacker trip boats. The same one from last night dropped an anchor nearly on top of us, with three others in close proximity, all playing a cacophony of music. This capped our afternoon.

In despair, we tried to relax by putting on our singalong playlist at full bore, so we couldn’t hear anyone else’s music. I have no doubt they were disgusted at our music, which included Bon Jovi, Tom Jones, Hilltop Hoods and Dolly Parton amongst many others! However, we thoroughly enjoyed it and managed to relax as we sang along, not caring who could hear! We feasted on ribs for dinner, and retired early again, anticipating a day of insurance negotiations tomorrow, and not looking forward to a forced return to a marina. Our only hope is that the work can be done in the next two weeks.

Little bird who came and sung to us at Hayman

lots of fish, but… 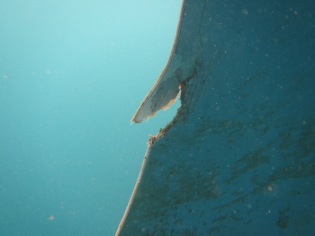 keel damage by the mooring