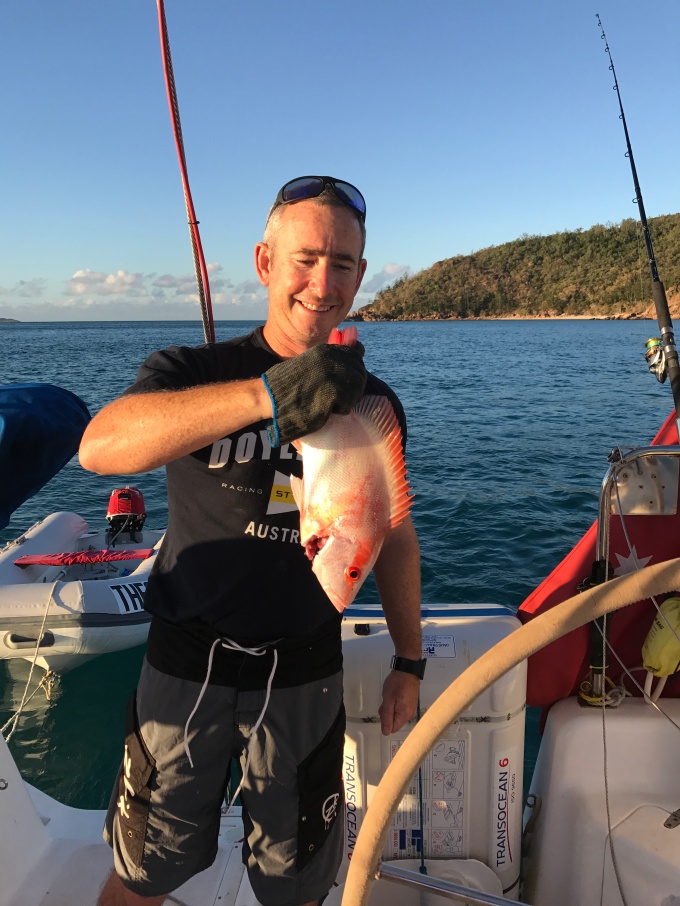 We had started to discuss the need to make a visit to the mainland during our time at Goldsmith, when we really started to get low on fresh fruit and veg. We were already on powdered milk, and both fridge and freezer were starting to look half empty. We were also not sure how much longer our gas had to go, and started to expect it to run out at any time. We wanted to keep going as long as possible though, given that conditions were just perfect, though with a doubtful cooking supply, we didn’t think we should be heading out the reef! We still wanted to get in as many islands as possible, so thought we would continue to mooch along north.

From Goldsmith we sailed the 12 miles to Thomas Island, and anchored on the northern side, tucked into Naked Lady Bay. Unfortunately, 2 other boats in the anchorage prevented me from demonstrating the bays name, though I did manage to paddle ashore and do my Pilates exercises on the beach in the morning. We ate the tusk fish that Pete had caught at Goldsmith, and found to our consternation that it had blue bones as well as blue tusks! Pete’s fishing skills seemed to be improving as he caught a small red emperor at Thomas, which we were going to have for dinner on Monday, when we got to our new anchorage.

Another very short sail took us from Thomas to Shaw, tucking in around Burning Point, and locating the 5m LAT in the gently shelving bay. All we could see was beach after beach, with wooded hills and pink granite rocks and headlands. It was a lovely anchorage and we were keen to explore, so headed into the beach and anchored the Goon Bag when it became to shallow to float the dinghy. It was a long walk into the beach in shallow water, and and even longer walk back out to the dinghy as the tide had turned during our walk and was flooding rapidly over the very shallow bay.

Tides out at Shaw! 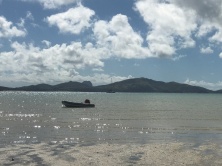 Goon Bag and WDS at Shaw 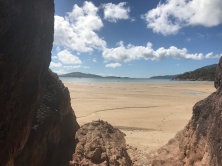 Low tide from the pink granite

Not sure what this one is, maybe a curlew

When we got back to WDS we saw Koonya and Marquise had left Goldsmith and were heading in our direction. They anchored shortly after and an exchange of texts invited us to a roast lamb dinner aboard Marquise, after sundowners on the beach. Unable to resist roast lamb, we accepted, with our red emperor remaining in the fridge and one more meal available from our uncertain gas supply. The beach was glorious in the late afternoon, with the tide in, though as the sun sank, some weird biting things came out and started nibbling away on everyone except me! It was time to adjourn for roast lamb.

High tide and sundowners at Shaw 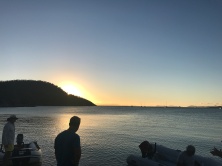 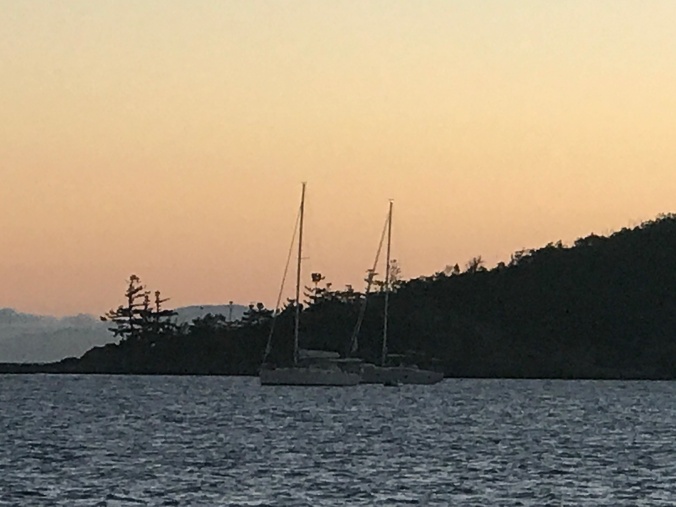 Marquise and Koonya at Shaw

We gave Janet and Mark a lift back to Koonya, then went back to WDS to bake Pete’s bread, which had been proving on the engine manifold. Today’s loaf was more successful than yesterday’s, and it had doubled in size, and baked nicely for about half an hour while we “dressed for dinner”! We found an appropriate magnum of Tabilk 2004 Shiraz as our contribution to dinner, as well as the mint jelly, and then picked up Janet and Mark on our way through to Marquise.

Ruth and Steve had a lovely bottle of 2004 Pol Roger to welcome us aboard and we knew it was to be another brilliant night with these great people! The lamb roast was fabulous with a plethora of veggies and several bottles of good red. This was followed by a decadent, ripe French cheese with muscatels and finally a game of cards against humanity. Eventually someone made the decision that we should probably return to our respective boats, especially as Janet and Mark had to head to Hammo in the morning, with the possibility of a trip back to Sydney. Somehow, we made it back to our boat, agreeing that it had been an evening of much fun and hilarity, but that tomorrow was an AFD!

Both Koonya and Marquise departed in the morning, but we decided to stay on another night, and explore Lindeman and Seaforth from the Goon Bag. So after a much more successful toast breakfast (the new loaf), we packed up walking stuff and headed across Kennedy Sound to the Lindeman jetty. There was a boat ramp which made for a very easy landing, and we pulled the Goon Bag up a bit and tied on to a rock. At the top of the ramp was a road! An actual tarmac road, which was steep, but surprising easily to walk up after our last few hills, with not even a goat track! We passed by the empty resort, which looked in much better repair than Brampton, though it was of course neglected. It didn’t look as though this had fared too badly in Cyclone Debbie, maybe because of its location, where it would have been more sheltered. When we chatted to the caretaker later, he confirmed that, saying the only real issue had been the big tides which had swept away the end of the jetty.

We climbed to the top of the resort and found the airstrip, and thought we would find the Mt Oldfield track from the far end of the airstrip. So we walked what seemed like miles on the freshly mowed (implying relatively frequent use) airstrip. We located the walking track which looked ok at first, but as we followed it further it became tangled with fallen trees and overgrown. Then of course the butterflies started! Once again we had to abandon a walk, not just for the butterflies, the track was pretty much impassible in places and we would have needed a machete to get through, not the stick Pete was attempting to use! We turned back, and thought we would, try the Plantation Beach track, as the sign at the other end of the airstrip looked in good condition and there appeared to be a maintained path as far as we could see. Yet again, the track petered out to an overgrown, tangled mess, with nothing to identify even where it used to be. In despair, we decided to head back to the Goon Bag and follow in Royal footsteps, to visit the pretty Seaforth Island, a short trip across the sound from Lindeman.

Arriving at the beach we saw 2 kayaks, and chatted to their occupants who had stopped for lunch at the picnic tables set back from the beach. They were kayaking the area from Airlie, and were heading to Shaw next, before riding the breeze back up through Islands. They asked us about camp sites on Shaw, but we were unable to say, as the site we knew of was at the The Neck, a long way north of where we were anchored. After wishing them a good trip, we located the path which led through a small, thick forest, past two pit toilets and then came out at the beach on the eastern side of the island. The short walk through the forest had been really hot, with no breeze, so we were ready for a swim here, though the tide was low and there was a bit of reef. With no one else around or even in sight, the lack of my swimmers did not stop me, and I took the opportunity for a nudie swim again.

start of the impassable track 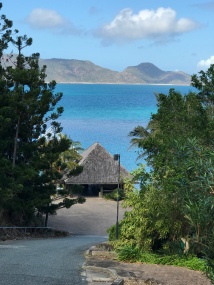 Tarmac road to jetty, Shaw in the distance

After drying off on the flat rocks surrounding the beach, we walked back to the Goon Bag and then headed back across the channel to WDS, now in a pretty uncrowded anchorage, with just Miramar for company. The air was heavy with smoke, and there seemed to be a large fire somewhere to our south. As we powered across we could see another cat coming in, and realised it was Rob and Jo on Double Trouble! We hadn’t seen them since Hexham, so we drove over to have a chat. It was great to see them again, and we agreed to have a chat on the radio later about a possible catch up. They had come from Goldsmith and said that the fire seemed to be on Brampton. If that was the case it was a pretty big fire, as the smoke was beginning to obscure the sun.

In the late afternoon we took Goon Bag around Burning Point for a fish, as Miramar had caught a coral trout there yesterday evening. Despite some determined fishing, with my excellent placement of the dinghy amongst shoaling bait fish and leaping bigger fish, Pete caught nothing except another marbled cod, and lost 2 lures 🙁. The light was beautiful as the sun set, with the smoke colouring the atmosphere even more than usual, as we returned to WDS empty handed, though looking forward to Red Emperor!

We had a quick radio chat with Double Trouble, agreeing to drop them a line once we checked out of Airlie, and hopefully arranging another catch up, then we prepared dinner. To go with the red emperor which we intended to cook whole on the BBQ, I was doing potato chips cooked in the oven and a salad with the last of our veggies. As son as the chips were close to finished, Pete went up to turn on the BBQ for the red emperor. Just as he was putting the fish onto cook, the flame went out and he called me to check the oven. That was also out. The gas had finally run out, and we had no way to cook the poor fish, but at least we had salad and chips for dinner! We quickly wrapped the fish and popped him back in the fridge, hoping we would be able to get a gas bottle filled tomorrow or find a public BBQ, as Mr R Emperor would need to be eaten tomorrow.

After such an exciting AFD, an early night was in order, as we would also need a relatively early start to get to Airlie, because the tide would be against us all the way there. We woke to complete silence and no motion, which is very unusual at anchor. There was an incredibly heavy dew, and low cloud enveloping the hills and headlands. It was a truly spectacular morning which had to be started with a swim off the boat, before a cold breakfast. Thank goodness for the coffee machine though, as a morning without coffee would have been untenable! The heat of the morning made us break a few of our weigh anchor rules, with us heading out of the anchorage with many windows open, the sunshade still up and the table in the cockpit!

We were not really looking forward to being in a marina again, but we were looking forward to getting gas and provisions, as well as being able to do a big load of washing. Wine-Dark Sea was looking forward to a good hose down and Pete was keen to polish the other side of her hull, to complete the job he had started in Yeppoon, several weeks ago!

Early morning cloud on the peaks of Shaw