As we departed Brampton, we could feel the breeze picking up to its 15-20 knots as we exited the shelter of the Island. Pete wanted to fish, so we flew only the jib, though we raced along at over 7 knots anyway, covering the short distance to Goldsmith very quickly. The only fish interested were of course the inevitable mackerell tuna, so he got rejected, free to jump on someone elses line!

The entry to Goldsmith on the southside was tricky, with some shallow areas and we werent sure if we would be able to anchor at Minnie Hall Bay. However, we got all the tools working – sonar chart, chart, sonar live and forward looking sonar, and between them all, we picked our way in to the anchorage without hitting anything! Minnie Hall was indeed difficult with a steeply shelving reef edge, so we decided to head through the gap between Farrier and Goldsmith and try Roylen Bay. This appeared shallower, and proved a much better option, even though there was a catamaran and a ketch already anchored. We were delighted with how pretty the island was, with a variety of hills and many sandy beaches. As there was also camping allowed, we hoped there may be a walk or two.

We launched the Goon Bag as soon as we were settled at anchor and headed in to the closest beach for an explorer. The beach was littered with coral and shells, with trees down to the waterline. We could see some tents and signs of occupation, but no one was in sight. However, we soon found the catamaran was a mother ship to the campers, when a large inflatable came ashore and we got talking to them. Its an NGO called WildMob, who spend a few weeks at a time at the various islands, cleaning up the weeds and the rubbish from the beaches. This group had about 8 girls and a guy, and they had been out and about all day. They were heading to the cat for a shower – their only access to fresh water!

The evening was cool, so we hunkered in the saloon for dinner and then played cribbage, with a small glass of Ruthless Ruth liqueur muscat to keep us warm!

Happy Admiral and Captain (but he needs a haircut!)

The next day was Bastille Day, and we decided that we would celebrate in style, with Champagne for sundowners, Cassoulet for dinner, brie for desert! However, we first had to contend with our first toilet disaster of the trip. So far we had had no problems with the either loo, but as I was flushing the electric toilet, the wall mounted soap cubby blew off the wall in the head! I knew the sewage bag sat behind that, so checked the bag and could feel it was very full. I checked the seacocks, which were all as they should be, then called Pete who was shaving in preparation for a haircut. He did the same checks as me, and we concluded that the seacock outlet must be blocked. I offered to go into the water to check it and Pete looked horrified – “If it is that and it comes out, you will be covered in shit!” he stated! I said there was quite a strong tide running, so if L stayed upstream of the outlet, I should be able to avoid getting fully covered. Pete looked sceptical as I got into my swimmers and prepared my tools of the cable tie, dive mask and piece of wire. I located the outlet and prodding with the cable tie did nothing, so I switched to the wire. Again nothing, so Pete gave me the paint scraper he uses for barnacles on the keel. This seemed to dislodge some hard shell/coral (more likely crystallised poo!), and then plugging away with the wire dislodged more. There was still no stream however, and anxiety poked its head in with us starting to shout at each other! However, one large prod with the wire, and I saw a well formed poo drift out, then another and then the stream began! I was upstream of the flow so missed getting covered in it, which is what Pete had expected! I called Pete to flush, and finally the bag emptied. We begged forgiveness of the island gods for having to do this here, but fortunately the tide was taking it offshore and dissipating the cloud quickly. Phew! Crisis averted.

We then got back to the job in hand of Pete’s haircut and eyebrow trim, which went smoothly, and was successful, though I say so myself! Just call me Sweeney Todd! Chores completed we spent the day exploring the various beaches on the island and fishing, and were very happy to have called in here, it is such a pretty Island. The fishing eventually turned up an apparently edible though formidably ugly blue tusk fish. He had to go in the fridge for tomorrow as the cassoulet was looking super good for dinner.

Sunset on Bastille Day has to be undertaken with a glass of champagne, so of course we partook of the bubbly goodness. Towards the end of the bottle we called Sylvie for some proper French interaction and had an hours chat about life, the Clipper Race and how we would meet up for Sylvie’s Australian leg of the Clipper race! We then settled into cassoulet, which though it had been intended to serve more than two people, the bubbles had given us an appetite to practically finish it! Though it was superb, even though made as we draw to the end of our fresh supplies. We finished the night with another closely fought game of cribbage, and slept like babies. 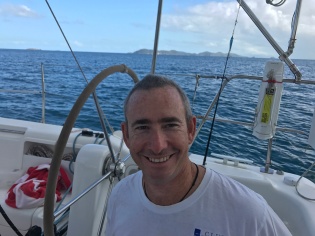 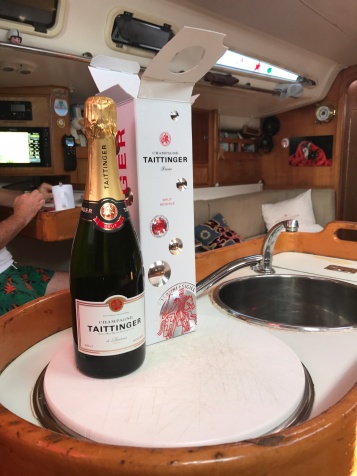 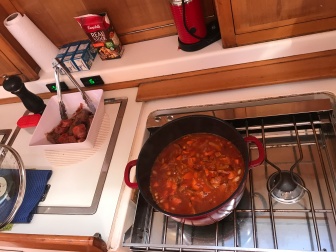 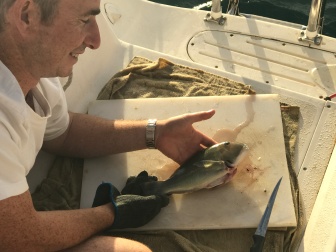 …not pretty to look at face on!

Rain woke us during the night so we had to close all the windows. This led to a very long sleep in, aided by hangovers brought on by more alcohol than we had consumed in a long while. When we eventually surfaced, the rain had decided to move elsewhere and the sun was making an appearance, as the catamaran from Wildmob.org left the bay. We were alone in this gorgeous anchorage and weren’t sure how long it would last. We had a hangover breaker breakfast of bacon and egg wraps, and Pete got to work while I paddle boarded into the beach for my Pilates stint. When I got back there was a plethora of boats who looked like they were converging on the island, but we watched most of them sail by. However, Pete popped his head up and said “Koonya is on the way” and sure enough the AIS showed them coming up the western side of the island. We were pretty happy to see these guys again, given the fun we had had with them back at Bundy, Pancake and Musgrave. Sure enough as they came around the corner, Marquise was with them and we were soon chatting, catching up on the last couple of weeks of each other’s activities. Before long we were all on the beach, preparing for a BBQ and heading for a bush bash.

Ruth picked the staying at camp option which was probably the best one, as the rest of us toiled up the hill on no path to speak of, with very dubious footing. As we reached the top, we crossed the actual “path” and decided we would take that one down! However, the toil was well worth it as the view from the top (actually half way up the saddle) down to the southern bay was beautiful. There was also the added bonus of a fabulous sea breeze, which cooled our sweating brows! After a photo stop, we headed back down, with everyone very keen for a swim and a cold drink, and we soon joined Ruth, floating in the crystal clear water next to our BBQ glade. A quick trip tot he boats for food supplies then BBQ time. We had a champagne celebration of reuniting the clan, then got into the serious job of eating, and drinking several bottles of red!

We managed to make it back out to the boats for sunset this time, just as well as Pete and I had each thought the other had put the anchor light on! A complete contrast to the morning, the bay was by now full of anchored boats, with someone moored about 20 meters away from us. Pete and I put the music on full bore to try to encourage them to move, using the sing a long playlist to work it. To no avail, as they were still there in the morning!

View to southern bay from our high vantage point

Celebration in the BBQ glade

With the dawn of a glorious sunny day, Pete and I decided it was time to move on, so we prepared to head to Thomas Island 🌴