We gradually awoke around 9, all feeling much better for a couple of bourse good sleep. It was a beautiful morning with the nor’easter still gently cooing everything down and the sun continuing to blaze down from a blue sky. We know the southerly is coming, but it’s still only at Newcastle, so we all congratulated ourselves on being tucked up in port now.

After morning teas and coffees, we decided to head up to the yacht club for one of their cracking breakfasts, then deal with chores after that. We got to the Yknot at 10:30 and breakfasted overlooking the ocean until about 11:30. Pete and I went to the jetty beach for a swim, Clare and Paul went to shower. At the beach, we saw a kid with an inflatable jet ski water toy! Cool – another inflatable we need for the menagerie! When we got back to the boat we helped put the main away, showered, did a load of laundry, vacuumed the floors, cleaned our bedrooms and bathroom. Cup of tea, collect the washing, then ….. OMG the southerly was in. We were very pleased to be moored in the harbour, as it built very quickly and we increased the fender situation going from 3 to 5 to 7 int he space of about half an hour.

pics of the calm before the storm! 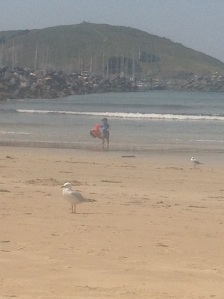 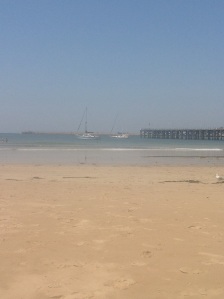 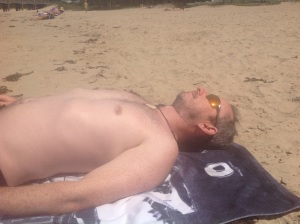 We then checked out the very large wooden 60 footer on our port side to ensure his dock lines would hold him, otherwise we would be squished. We watched the build up of breeze as it soared up to 50 knots, and were enormously thankful for getting in so early this morning so we were sitting this out on the dock. Still disoriented time wise, from being up most of the night and then the change from QLD to NSW times, when Paul’s dad arrived and we went to the cafe for drinks, we were feeling like it was about lunch time. Actually it was about 5!

We had a pleasant couple of hours chatting and drinking with Geoff and Joan, and then it was back to Pilgrim to ensure all was still well ( it was) to cook roast pork for dinner. We also watched a film, while the wind continued to whistle around us and lean us hard to starboard. A fabulous roast pork dinner again, a good film ( it had Anthony Hopkins so was always going to be good) and then a nightcap and chocolate and to bed. We still don’t know what will be the score tomorrow so it’s a wait and check the weather forecast in the morning.

Top wind gusts seen today was 52 knots and that was in harbour. The top of the sea was being lifted off, behind mutton bird island, and that was sheltered. It’s absolutely wild on the ocean so we arent sure how long it may take for the aftermath to go through. Looks ok in Sydney now, bit that 240 miles away.