We spent the week settling in to being in a marina again, not a small task after the long days and nights at sea and the complete lack of other boats around us. In addition, we needed to think about WDS being able to weather stormy conditions, tied up to a dock. Not such a problem at anchor when you know you will generally face into the wind, but in a marina, this is unlikely to be the case. We were required to remove the headsail, and we knew that we would also need to remove as much as possible from on deck, as well as the solar panels and dodger. Fortunately there were several boats and owners around, as well as the helpful marina staff, that could give us advice about how best to prepare, not only for cyclones, but for the frequent storms that we would see over the wet.

As well as boat prep, we were able to get out and about and explore a bit of Darwin. We bought bus tickets for the short trip into the city, and went off to see what was there, as well as to buy some bread and milk. Strangely, even though the marina is surrounded by apartments and houses, as well as cafes and restaurants, there is nowhere to buy basic provisions! We also found time to visit the Waterfront, test out the wave pool, and check out Stokes Hill Wharf, where many of the sunset harbour cruises depart from and where you can get a great ice cream to watch to stunning Darwin sunsets!

With a hire car, and with Pete back in Sydney for some meetings, I also ventured further afield, having a swim at Berry Springs, shopping at the new Gateway Mall in Palmerston, and visiting Casuarina Coastal Reserve as well as East Point. It’s incredibly flat, but still so much greenery everywhere. If there is one thing I did not expect it’s the striking colours of the Territory, with green, green bushland, turquoise waters and red cliffs and sand, and as for the sunsets….. 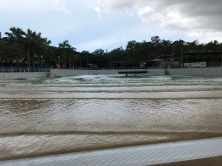 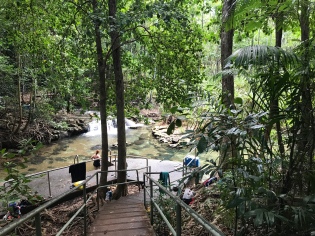 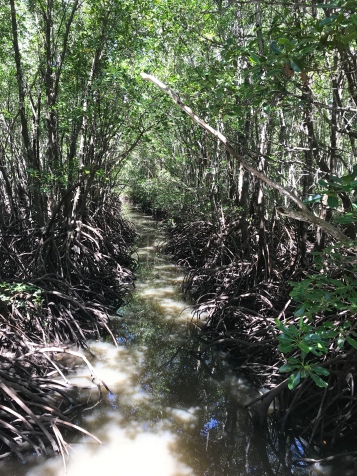 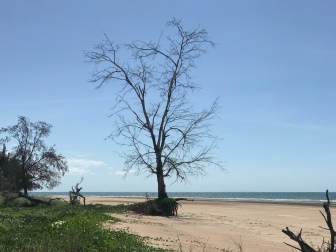 On Thursday, it was my turn to adventure away from WDS for the first time since leaving Sydney. I was meeting Pete in Perth, but more importantly, we were going to see Sylvie, leaving on her second Clipper Race leg, from Perth to Sydney. Sylvie and I had met at uni through the Sailing club, and had stayed close friends ever since, despite the tyranny of distance. Sylvie had already completed the first, Atlantic crossing leg of the Clipper Race, and was now embarking on the three races making up the Australian leg, Perth to Sydney, Sydney to Hobart, Hobart to Airlie Beach. Pete and I hoped to be able to see Sylvie and help out as necessary at each leg, although we would not get to Tasmania.

I was greeted with a delightful text from Qantas on Thursday morning telling me I had been upgraded to Business class! Woo hoo! A couple of days of preparation, including leaving Cruising Basil and Dill – Bert with Chrissy and Mike on their boat, and WDS was ready to leave on her own, dehum in full swing! I completed all the tasks required before heading to the airport, via the marina office, to let them know the boat would be unattended until Pete got back on Sunday. Once at the airport, I breezed through all the formalities – business class travel greatly assists with that! – and headed for the Qantas lounge. Bliss…a very comfortable couple of hours, food and drink as needed, as well as wifi to do all my updates!

The flight went quickly, and I landed on time in Perth and got my Uber sorted, arriving in Freo at our little studio. Great to see Pete again, who had arrived several hours before me with a huge hangover from Wednesday twilight Sailing in Sydney! We headed straight to Fremantle Sailing Club, and the Clipper berths and finally I got to hug Sylvie! It was brilliant to see her again, meet some of her crew mates and have a first hand look at Unicef, the Clipper 70 in which Sylvie had crossed the Atlantic, and was about to semi-circumnavigate Australia. When work for the day was completed, we headed to the bar to catch up, and then found a local curry house for dinner. We arranged to see Sylvie at the boat next morning, where we would help out with race preparation. 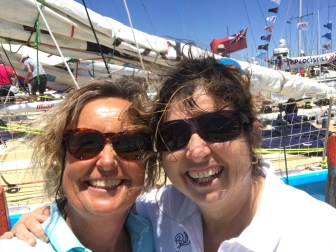 Sylvie and her blue boat

We arrived much later than the race crew, after stopping on the way to the dock for breakfast and coffee. Sylvie greeted us with our support crew wrist bands and we got to help out with fixing pull cords to the brass hanks of all the Yankees (that’s a sail, for those less nautically inclined who may be reading!). We also helped out on a number of provisioning line ups, passing bags and boxes of groceries, on to the boat and down below. When the crew briefings started, Pete and I headed off to find a shop to get some additional items for dinner, which we would be having at Sylvie’s crew house. 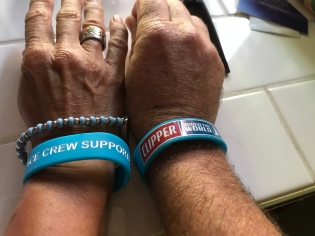 Our handiwork on the hanks

That evening, we had a very conducive dinner with Sylvie, Anne-Lise (team coordinator), Alison (team victualler) and Stuart (team engineer), hearing about their stories and anecdotes from the race so far. We laughed so much my sides were hurting by the time we finally left them, to have their final sleep ashore before the race start tomorrow.

We were at the dock early and got to experience the pre-race nerves in the count down to the line slipping, which was completed with much ceremony. We also managed to catch up with Wendy, skipper of Sanya Serenity Coast, now a Sydney celebrity from the Cruising Yacht Club of Australia, completing her second Clipper Race as skipper. It was great to see her and be able to wish her well on her “homecoming” race leg. Of course we spent a long time saying goodbye and good luck to all our friends on Unicef, with extra big hugs for Sylvie. We were able to take lots of pictures as they slipped their dock lines, accompanied by Fat Boy Slims “Praise You”, the team song, and we waved and waved until the boat disappeared behind the break wall.

We watched the boats race up the coast and out to Rottnest Island, with Wendy owning the start and leading the race until we could see them no more. Then we had to switch to following them on line, which we would be doing every day now, until they arrived in Sydney in about two weeks. Check it out for yourselves at clipperroundtheworld.com select Race Viewer.

Pete and I had arranged to catch up with some friends at City Beach for an early dinner, so we headed out intending to have a swim in the Indian Ocean. Of course I managed to forget my swimmers, and watched in envy as Pete swam in the cool ocean, but we found a great bar to cool off in, and had a couple of drinks before meeting our friends. After a lovely evening at the beach, Pete and I made it back to our studio, remembering to set an alarm to ensure we would get to the airport on time. Pete had an 0830 flight back to Darwin, but I was heading to Sydney on a later flight. Getting to the airport with Pete meant that I could get into the Qantas lounge, which was a necessity given the size of my hangover! I don’t remember the last time I had a hangover, but I expect that spending some time in Sydney may induce several more over the next few days! 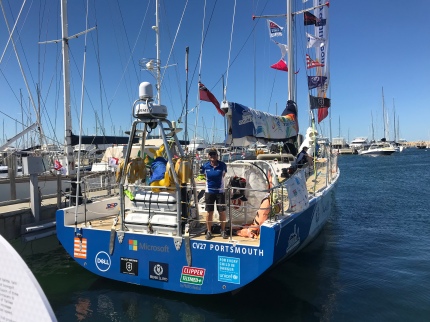 Sylvie with the banner sent by her sister before the start

Schmoozing with our Unicef friends

Racing up the coast 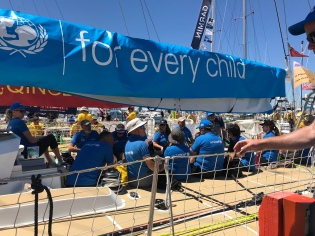 One thought on “Tripping with the Clippers”