Fran and I got up early on the Wednesday and headed off up the big hill to the Atherton Tablelands. Our first stop was the Cathedral Fig, which was spectacular in a different way from the Curtain Fig, having way more ecosystems growing in its crown. These figs are quite something else, with a huge aerial root system creating a massive diameter of tree, with so many various plants and animals making their home within it. We walked around it and appreciated the whole surroundings, including the beautiful bird song in the pocket of rain forest we were in.

From there we headed to Lake Barrine, the crater lake that Pete and I had visited the previous week. Fran and I were a lot earlier and we hoped to be able to visit the cafe for morning tea and maybe get a trip on the boat. The lake was as beautiful and serene as it had been when Pete and I were there last week, but we had just missed a boat trip and there wasn’t another for two hours, so we resigned ourselves to scones and cream for morning tea! We had a delightful tiffin on the verandah overlooking the lake and it’s fish and bird life, with delicious scones, so much better than my home made efforts! After these reinforcements, we took a walk along the lake track, passing the giant Kauris and seeing others along the way.

From Lake Barrine, we continued on to Yungaburra, where we had a drive through the little town, checking out all the lovely old colonial buildings, and then headed for  Gallo dairy, so we could see where Clare gets her Atherton Tablelands cheese from, that she serves in the Pilgrim cheese platters. We had a good look around the dairy, tasted a range of cheese and purchased several! From here, we went to the waterfall at Malanda, where we stopped and walked to the falls and swimming pool. It wasn’t tempting to swim there, though, so we continued on through Tarzali, stopping at a place which advertised that we were guaranteed to see a Platypus in the wild! How could we resist? We turned in and parked at a sign that also advertised a smokehouse, and asked about the Platypus. It was $8.50 per person and we were guaranteed a viewing, so we decided we had to do it. While waiting for the guide, we tried some of the smoked produce, and ended up buying a crocodile chorizo, a spicy sausage and some bacon.

We were then guided to the ponds where there were apparently about 12 Platypus, all getting excited about it being mating season! Sure enough, we were lucky to see several Platypus, coming to the surface of the ponds to breath, fairly close to where we stood. We also saw a couple of males, cruising on the surface, as apparently they do when they are looking for a mate! We were delighted and astonished to have had this unexpected viewing.

From here we stopped at a roadside produce stand to buy some paw paw for a rediculuosly cheap fifty cents! We started to feel like a late lunch by now, so headed for Mungalli Dairy, and a few more waterfalls. We found a lovely loop road on the way to  Mungalli with three different falls, all with swimming holes, though again, we were not tempted to join the many people taking advantage of the water. Zilzie Falls, Milla Milla Falls and Ellindja Falls were progressively more beautiful with more challenging walks to them, and we were ready for our delicious ploughmans lunch at Mungalli Creek, which showcased some of their great produce. Again we purchased lovely dairy products, including real milk with cream on top and thick cream.

It was now getting quite late, so we decided it was time to head back down the hill, and with one last spectacular stop at a view over the Johnston River Gorge, we made it back to the boat as dusk fell. 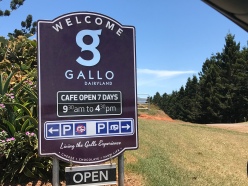 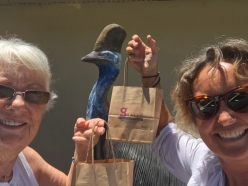 Purchases and the local cassowarie 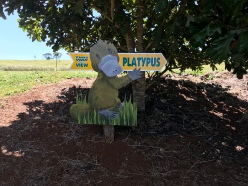 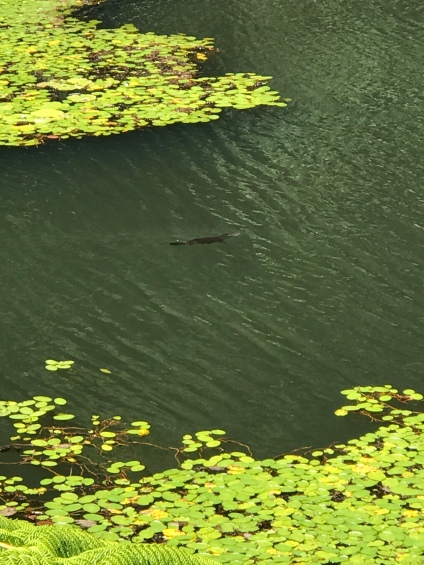 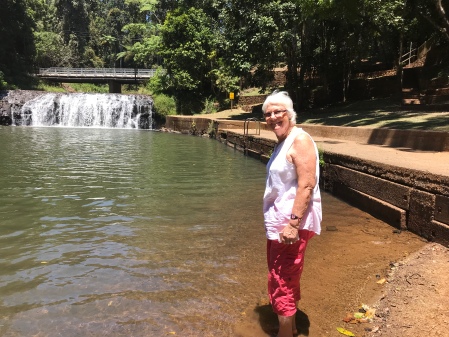 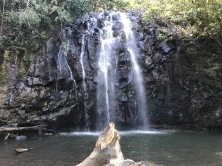 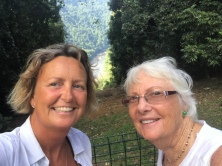 Thursday was a day for more passage planning, a bit of swimming and some sewing, and Friday I had to do some shopping and pick up my contact lenses which had come in to OPSM. In the morning, I had seen a Facebook post by Sandy showing a brilliant Hallowe’en cat she had bought at Coles, and missing Smudge and Noodles, I thought it would be fun to see if I could find a similar cat in Coles here. Of course they had them, and so delighted with my purchase I carried it back to the boat under my arm. I texted Pete to tell him we had a new cat, and after his immediate horror, he Joked about black fur everywhere. I told him it was likely to be worse – Black tinsel everywhere!

After much deliberation, we named him Spaghetti, because whilst he was the same colour as Noodles, his fur was straight!

It was great to have Pete back once I picked him up from the airport, and we had a quiet evening on board. On Saturday morning, Fran and I headed to the Esplanade Pool to have a go at the free aquarobics class that runs at 0900. It was very enjoyable, and we came away feeling like we had had an hours work out, my aches feeling better than they had for a long while! At around 1130, as we were lazing around on the boat, Malcolm and Barbara Shaw popped by. We know them from the RSYS, and Malcolm had let us know they would be in Cairns this weekend. We had coffee and Frans delicious home made shortbread, and after chatting for ages, agreed that we should head to the Salt House for lunch. We ended up having a lovely and very long lunch with Malcolm and Barbara, and enjoyed very much seeing friendly faces from Sydney. Needless to say, dinner was unecessary that evening, though we did score some fabulous home made chocolate and caramel cake from the girls next door, celebrating a 40th birthday with a girls weekend on Miss Angel. 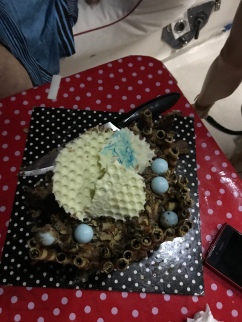 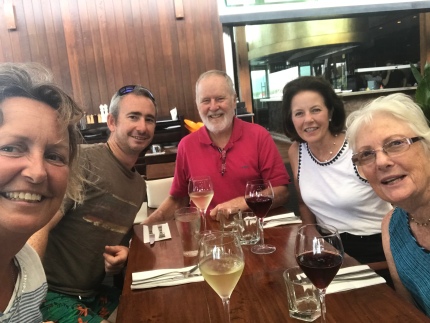 Lunch at Salt House with the Shaws

Sunday was toilet installation day, so whilst Pete and I got into work gear and got the tools out, Fran headed off for an adventure to Palm Cove. We had the new loo in and operational by lunch time, and so treated ourselves to a swim in the lagoon before getting through a heap of other odd jobs. Final job for the day was the raising of the new Welsh Flag, which Pete had brought back from Sydney, and with the Welsh Anthem sung by Only Men Aloud, we officially hoisted the new flag.

After a work day on Sunday, we gave ourselves Monday off, and all went on a road trip to Port Douglas. We had a lovely lunch at Salsa, as recommended by Dougie down in Magnetic Marina and also did some good shopping. The weather was not so kind and threatened rain all day, but it wasn’t until we returned to Cairns in the evening that the rain started and the thunder rolled in. Thank goodness we had put the full boat covers on before we left. It was a miserable night, with heavy rain keeping us awake for a lot of the night, and the need to shut most of the windows making it humid and stuffy below. I still got myself up at 0600 to take advantage of another free class at the pool, this time Pilates. 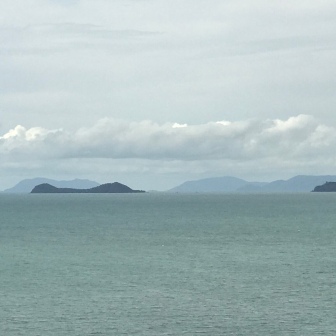 View down the coast to Double Island 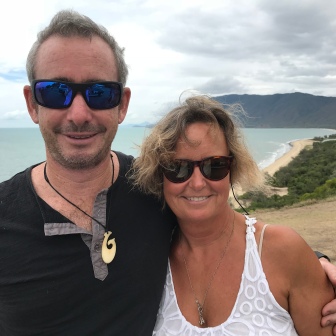 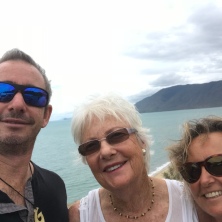 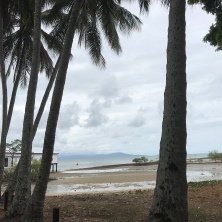 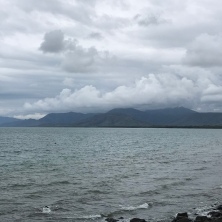 The weather rolling in..

I don’t know if it was the already troublemsome hip, the long day in the car, or doing Pilates in the rain on concrete, but after the class my lower back became more and more painful, and by the time I had to leave for my Physio appointment I couldn’t have driven myself, and could only just walk. However, Laura the Physio worked her magic and taped me up, sent me home with four pages of stretches, and by the next day I had started to regain movement and could find a comfortable position. A combination of all the issues had caused my lower back muscles to spasm, so it was just a question of releasing the spasms, which the stretches soon did, helped by my hotwater bottle.

With our lift out booked for Friday, Franny had decided to head home on Thursday, as the thought of having to climb up and down a three meter ladder wasn’t her idea of a holiday! It’s not mine either, but then I am not on holiday! We took Fran out for dinner on Wednesday evening, and had a very pleasant evening, despite the continuing rainy weather. However that night a huge thunder storm rolled in, and kept us all awake from midnight to 0600, when it finally started to draw away. Pete took Fran to the airport in the morning, and I started to prepare the boat for getting lifted out, getting all the laundry done, drying out what was possible to dry and then starting on a provisioning check.

Our plan is still to try to get to Darwin before 1 December if we can get the work needed done quickly, so I had to consider what our provisioning requirements would be for the whole trip. Opportunities to pick up supplies once we left Cairns would be very limited, so ideally, we would carry as much as possible with us from here. I have to estimate our needs as though we would be at sea for six weeks.

Once Pete got back, we spent the rest of the day crossing jobs off the list, making sure all was ship shape for our departure from the marina and trip up river, getting Goon Bag stowed on deck and preparing the backstay for removal. The sun came out a few times, allowing some drying out, but we were tired from the restless previous night and a little nervous for the morning, so we had an early night. We both slept very well, but awoke at 0600, so decided to get up and start the prep for unmooring.

We departed our berth at about 0850, and made our way upriver and then up Smith’s Creek. The yard was ready and waiting for us as we pulled up and Pete reversed expertly into the very narrow travel hoist pen. The hoist went smoothly with the yard showing their expertise, and within an hour we were landbound, Wine-Dark Sea sitting high and dry on a number of acro props, reinforced with chain. As this was completed, the boys from Mcleod Engineering arrived and as Pete helped them to get the prop and sail drive off, I walked back to the marina to pick up our little hire car.

So it seems that our sail drive is cactus, which requires a complete replacement, and this has to be ordered from Sydney and Brisbane. We are hopeful that it will arrive mid next week and be fitted pretty quickly, in which case we can still make our way to Darwin. However, any delays now put us in a position of having to carefully consider covering the thousand miles to Darwin, as we head into Cyclone season and much less favourable weather. We contemplate all this as we sit inside the boat, sheltering from the rain, four meters up in the air, with a slight pitch to the stern. We will have to sleep the other way round in bed tonight!