Britomart Reef. Sounds like the type of place you might pick up discounted electrical appliances, and cheap flat pack furniture. But no, this is a pristine reef, about 20 miles east of Hinchinbrook Island, and the place we would spend my birthday.

Being at sea makes it difficult for stuff like receiving birthday cards, gifts and birthday cakes, but somehow we manage! Last year Pete and I spent the day at Fitzroy Reef in the Bunker Group, similarly anchored in the middle of a “featureless” ocean. I received many electronic wishes when we finally got back in mobile range! This year, Britomart Reef had the added joy of being within mobile range, so I was able to have a birthday facetime with mum and dad and a number of other friends and relatives. At times like this, it is great to be connected.

We arrived at the reef around 1530, and the sun was quite low in the sky so finding an anchorage was a little challenging. We had reliable information on where to drop an anchor from Rob and Jo in Double Trouble, and we thought we were in the right area, but we could see a lot of bommies. We finally found a sandy spot, but later realised were a tiny bit too far north, as about 100 meters away there was a large clear sandy area. Pete dived on the anchor and was comfortable that we were clear of any bommies, and we decided to stay put. Other than a few small fishing boats, there was no one else in sight and certainly no other yachts. Whilst we could see the varying colours of the reef, there was no other feature on the ocean, and it felt like we were anchored at sea! We could however, still see the majestic mountains of Hinchinbrook, which seemed to have been visible since we departed Maggie!

We settled in to our anchorage and had sundowners as we watched the sunset over Hinchinbrook, the first sunset we had seen for a few days, that wasnt obscured by land. I cooked up paella for dinner on the BBQ, for which we rigged a wind break, as the breeze off the ocean was keeping the BBQ a little cool. As I cooked and stirred, Franny, Pete and Choppa passed me various items until such time as I could leave the pan to cook and crust up! I had to do a very interesting limbo to extricate myself from the windbreak! The paella turned out well and we all had an early night in preparation for a big day of snorkeling the next day.

On waking, Pete presented me with a card he had made, depicting some of our favourite stops so far on the trip. It made me a little teary…I had lots of messages from friends and relatives, and mum and dad made a quick facetime call (we had had a long chat the previous day) and sang happy birthday! Franny cooked us pancakes for breakfast, and then we all piled into the Goon Bag to go and get a really close look at the reef. As we dropped into the water, the first thing that struck was the incredible clarity, with visibility a good 15 meters or so and such a contrast to some or our more recent underwater trips. As we approached the nearest bommie, it became apparent we had found an incredible area of pristine diversity. There were so many types of coral and thousands of fish that it was hard to know what to look at or where to swim to see more. In fact, it almost felt like you swimming in an aquarium! It was glorious, as well as comfortably warm. After this first snorkel, we headed off across the turquoise lagoon to find another area, where the bommies were closer together and had gullies between them. It was awesome to swim along the gullies and see the variety of coral and fish at the different levels. Eventually, our skin saturated, we headed back to the Goon Bag and WDS for a rest.

two turns in the Goon Bag! 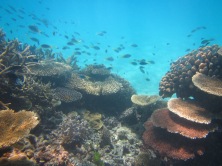 We had a lovely lunch of rockmelon, serrano ham, smoked goats cheese and crusty bread, then spent the afternoon chilling out and snoozing. Pete went fishing and caught a couple of small fish he could use as bait, and when he got back he saubraged a champagne for our sundowners! This was followed by a lovely dinner of roast lamb, with our bottle of Wynns Michael, a 20 year old wine, we had been given by the wonderful About Time crew on the Squadron Cruise! We finished dinner with a birthday tiramisu, a candle and the birthday song! It was a lovely end to a lovely day!

the sabre is out!

champagne in the mermaid tail glass in my tea towel dress

thanks to About Time crew for this delightful drop!

I hadnt slept too well after all the food and excitement of the the big day, and woke a bit achy. When Pete suggested a snorkel before breakfast, we all jumped at it, and after coffee headed off to yet another section of Britomart Reef. It was even better in the morning, with a slightly lower tide and even less breeze, and just stunning under the water. Its hard to describe how wonderful it was so I will just rely on the photos to show you, and there are also some videos on facebook. We upped anchor after returning to WDS and decided to cook breakfast on the go, but almost as soon as we had passed over the drop off, Pete caught a fish. It was of course our hated mackerel tuna, though this would make great bait. As Pete finished processing this, the line went again, and this time there was a fight on. Pete thought it was a spanish mackerel at first, but when we got it in, it turned out to be a long tail tuna. Yay! we finally got fish for dinner!

Eventually we managed to eat our bacon and egg wraps around lunchtime, and then settled into the motor to Goold Island. I sent myself off for a sleep and managed to get a couple of hours, waking as we approached the island. It was another pretty anchorage, a high wooded island with a delightful sand spit, and of course the ubiquitous Hinchinbrook Island as a backdrop. There was one other yacht in the bay, and Pete and I were delighted to see Yabba, who we had last seen at Percy. We had a quick chat with him on our way into the beach for sunset, and he told us he had been to Cairns and was now heading back down south. It was pretty on the beach, with good camping facilities, but we found the biting flies and other creatures unbearable, so didnt hang around very long. We did however manage a facetime call with Stu, Megan and the girls, as well as Uncle John Green, who were all able to appreciate the sunset with us!

Back on WDS we had sashimi tuna for dinner, with a delicious Japanese style salad – very healthy after all the rich food of yesterdays celebratory dinner. As we sat in the warm moon light after dinner, we considered ourselves a bunch of very lucky humans, to not only live in this great country, but to have the great good luck to be able to appreciate this very special part of the coast. It had been a birthday of 48 hours duration, but living this life, with my very special partner, Pete, every day seems like my birthday. 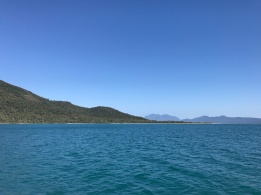 WDS in the distance 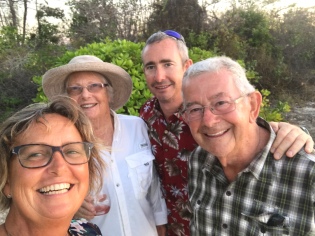 Goon Bag waiting for us 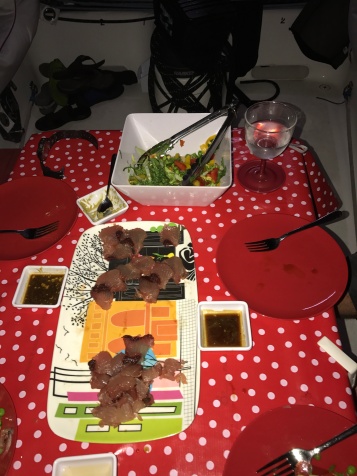 8 thoughts on “Best. Birthday. Ever.”