Pete was superlatively optimistic as we approached Mackay, expecting that we would be in and out of the water, fully repaired in 24 hours. I cautioned that this may not be the case, and we needed to think in terms of days, rather than hours. In the end, Pete was spot on! Greg and his boys at the yard, couldnt have been more helpful, and John, the shipwright, was absolutely fantastic, starting work almost as soon as we were over dry land!

After another engine powered bash directly into 20 knots from Brampton, we arrived in the marina about 10 o’clock, and moored on C arm while we waited to be called into the sling. We took the opportunity to hose down the decks after the salt bath we had received from two days of powering into a 20 knot sou’easter. That completed, we prepared WDS for her lift, removing the backstay and taking a line under the stern ready for the hoist sling. As we finished the work, we were delighted to see Ruth and Steve from Marquise, who popped over to say hi before they left to head back home. They were leaving Marquise here until October, when they would cruise her back to Pittwater. Ruth came armed with a bag of goodies they were not going to leave on Marquise, and we were the grateful recipients of some lovely produce to keep us going for the next few weeks.

At about midday, we were called to the hoist and commenced the lift out process. As soon as WDS was over dry land, the boys guerneyed the keel and John had a good look at the damaged area. He said he could have it ground back, glassed and bogged that afternoon, and sanded and painted in the morning so she would be ready to go back in mid- morning tomorrow. Greg and he agreed that they would not worry about a cradle and would just leave her in slings, with the keel supported by a block, so she didnt swing. True to his word, by mid-afternoon John had completed the bogging and it dried in the late afternoon sun and overnight. We decided to eat in the pub, as washing up after cooking aboard was difficult without being able to use the sinks. We didnt want washing up water draining all over the newly bogged repairs!

We were of course staying on board, which meant a trip up and down a really steep ladder about 4-5 meters in the air to our stern, to go out and to visit the loo. Because of this we were a bit careful about not drinking too much when we had dinner in the pub! We managed to get on board safely afterwards and slept pretty well, with no rolling, water slapping or whale song to keep us awake! We got up in the morning as soon as we heard John start sanding the keel at about 7:30, and by 9:30, we were back in the water and back at C arm, re-attaching the backstay.

We needed to fill with fuel before we head north again, and Pete was waiting for an engine part which was due to arrive before lunch, so we decided to head over to the fuel dock as it was getting busy. Mackay was hosting the World ARC, and competitors were starting to arrive, with the fuel dock the designated customs clearance. Consequently finding a space was hard work, and we did ourselves no favours by making a hash of the docking – very unusual, as we have become pretty adept over the years. We didnt hit anything, but we came close, and the help of several ARC competitors with incredulous looks at our incompetence, did nothing for our morale! Then of course the bowser decided not to give us fuel, so we had to wait until the American in front of us left to move forward to that berth to use a different bowser.

Fueled up, Pete went to pick up his engine part, only to find the current version is not compatible with our engine, so he had to order a whole water box for the exhaust. We decided that things being as they were, we should stay the night, await the new water box and then head north. Hopefully this would help us to lose the tiredness that had been dogging us since our mooring incident, and we could have a fresh start tomorrow. So we have booked in to the marina, and hopefully we an have a chat with some of the ARC crews to hear about their trip so far and next destinations.

How we spent the night!

John had already ground back the damage in the time it took me to get my shower stuff together!

Lovely view from the yard! 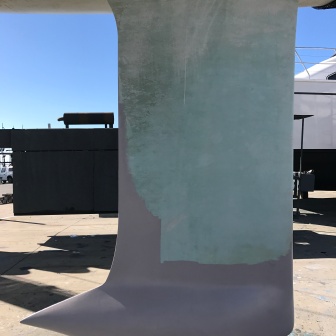 A lick of anti-foul and she is good as new!