Having motored all night due to no wind, we hoped to do some sailing with daylight, but the lack of breeze continued. We arrived at Blue Pearl Bay around 1500, and were able to pick up a mooring, which would be less problematic for Pilgrim because of her keel shape. Once moored, we launched Budgie and headed straight in for a snorkel. As we gathered our gear, and climbed into wetsuits, Clare realised she had not brought her snorkel, thinking she had one with her new mask. This didn’t stop us heading into the water where we had extremely good visibility. Whilst the devastated coral was still disappointing, there were so many fish who were all so keen to check us out, it was a very worthwhile swim. As we dried off on deck, admiring the westering sun and preparing sundowners, a bunch of backpacker boats picked up moorings around us and all headed into the water, shrieking and splashing, with music pumping from the mothership. It may be a profitable excise for the operators of these ex-racing yachts, but I think it spoils the serenity of an otherwise beautiful and serene area. Despite all this, we heard amazingly close whale song after dark, and could hear the whales taking breaths very close to us in the bay.

After an early night, and of course an early morning wake up by the incoming backpacker boats, we set off for Hook Island to see if we could get a mooring at Maureen’s Cove. Once again luck was with us, and once mooed, we set off to snorkel. Near the mooring was not so good and the visibility was quite poor, but we chatted to the one other boat on a mooring and they suggested the eastern point. They were also kind enough to lend Clare a snorkel, so she could enjoy the underwater vista more comfortably! We headed out to the point and the visibility became steadily better, and the coral improved. Whilst the coral is still far from its former glory, there were some areas of really good regrowth and lots of fish.

We returned the borrowed snorkel on our return trip to Pilgrim, and had a cup of tea while we contemplated a bottom scrub. It was an ideal location for us to give Pilgrims bottom a makeover and four of us would speed up the process. Refreshed, we pulled wetsuits back on, and while Paul used the hookah to do the keel and deeper parts of the hull, Clare, Pete and I scrubbed the waterline and as far under as we could reach. The job was done in about forty minutes, and after a light lunch, we unmoored and headed round the top of Hook to make Whitehaven by sunset. With such light conditions, we figured it would be a good place to overnight, close enough for us to have a sleep in but get to Hammo by early afternoon.

There was enough breeze for a gentle sail down to Whitehaven, and we had a lovely couple of hours under heady, with the music playing, all kicking back on bean bags as we admired the beautiful scenery. As we pulled in to the anchorage, most of the day trip boats had departed or were in the process of departing, so it was much quieter here, with just five or six other boats, none of which had noisy backpackers on board! We organised sundowners, and headed into the beach to watch the sunset over the island, as we sipped gin and tonics on the pristine white sand of Whitehaven beach. Before we returned to Pilgrim to cook dinner, I had a quick swim in the lovely luke-warm water, revelling in the blues, pinks and purples of the sunset as it created a kaleidoscope of the white sand, turquoise ocean and blue sky.

We dined on deck, under the stars with the soft evening air all round. It was a truly beautiful night and a great way to prepare for the week long craziness of a sailing regatta! We all felt very relaxed the next morning as we sailed around to Hammo to take up our marina berth for the week! 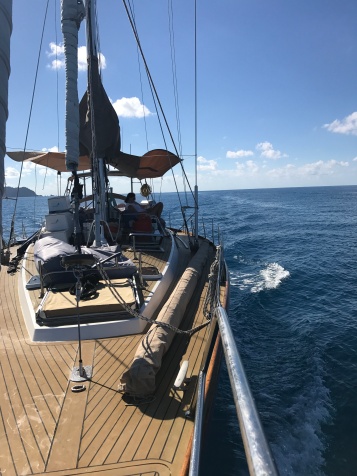 I had got up in the morning feeling a little under the weather, so went back to bed for a lie down while the others went ashore for a swim. It took me a good few days to  work a head cold through my system, though I was much improved by the time racing started. We had two full days of preparation, stripping off non-requisite gear, making sure all the sails and running gear were in good working order, and having a bit of practice. However, on our designated practice day, the wind came in at 30 knots, and whilst Pete and I helped Sweet Chariot get out to a mooring for her bottom scrub, Pilgrim waited to see if the wind would moderate. Eventually the wind did start to drop and we headed out to put up our smaller headsail. It took a couple of goes to find a sheltered enough location to do this, but we did get it on and were able to do some practice tacks. We decided that spinnaker practice was just not feasible, and the way the forecast for race day one looked, we figured discretion was the better part of valour, and we were not currrently likely to need a spinnaker!

Day one of racing was a thirty mile course with the breeze around 25 knots as we started, though it did gradually moderate. As we crossed Whitsunday Passage, the kite hoist was called and we flew it for a while until a shape change indicated that the middle of the sail had left the tapes. We did manage to retrieve the two halves of the kite and stuff it in the bag, as the next and heavier cloth spinnaker was brough on deck and prepared. We had more luck with “Captain America” which flew comfortably in the heavier wind, and finally started to claw back a few places. After a long beat back from North Molle, we crossed the finish line around 1600, all pretty tired.

Days two and three were much lighter wind, so much so that a shoertened course on day two had us back in the marina around 1500, whilst Pete on Sweet Chariot didn’t get in until it was nearly dark. Day three had a much delayed start time and a very short course when we eventually got under way, and everyone was back in the marina at a reasonable hour. With a lay day the next day, everyone prepared to let their hair down for the evening, and planned a bit of a party. Pete and I dined with the Sweet Chariot crew and had a very pleasant dinner. We then headed over to the tavern to catch up with some of the Pilgrim Crew, and ended up partying until 0100!

Like almost every day so far, the lay day dawned warm and sunny, showing promise of a perfect day to spend beside the pool. We had a very lazy start to the day, then did some boat jobs before heading across to the yacht club villa pool to while away some time in cool water. It was deserted, with most revellers either at Whitehaven or at the main pool, where there was a regatta pool party under way. We had a lovely quiet and relaxed few hours, and ended up on the yacht club deck in the Piper Heidseck bar, as plans for a One Tree Hill sunset were scuppered by a private party there. It ended up as a quite a party, with practically the whole crew and shore crew got together to enjoy the bubbly stuff!

Race day four dawned very light, and despite persevering until 1400, the race committee could not find the slightest breeze in which to set a course. Racing was abandoned and most crew retired to the main pool, where the pool bar was manned by just a single bar tender! Fortunately we realised we could get served at the main bar very much quicker, without the need to get to wet, so we settled into our loungers and took it in turns to buy the rum! In the evening we had a lovely crew dinner at co ca chu, which is on the beach at Catseye. It was a gorgeous evening and we were able to sit on the verandah outside after dinner and have a drink, while admiring the warm air and starry sky.

Finally the breeze came back in for day five, and we set off into Dent Passage with 25 knots on the wind speed indicator. We watched all the other divisions start ahead of us as the breeze continued strong and gusty, with a big northerly tide regularly taking boats over the start line too early. We geared up for a spinnaker start, and squeezed along the western side of Dent Passage, running by the lee, making great gains on our competition. Even when we touched the bottom, on the verge of a Chinese gybe (which would have been horrendous had it occurred), we somehow kept our speed up and managed to get out in a great position. A couple of sheets parting at inconvenient moments and a spinnaker brace that broke about 50 meters from the finish line, meant we ended up mid fleet, but all in all, everyone had performed well and worked really hard in tough conditions.

As I write, we have one more day of racing, with two races due tomorrow and another day of 20+ knot breeze. Everyone is determined to throw everything at it tomorrow and we are all having an early night, not just because we need to get up early, but because we are all shattered after today! 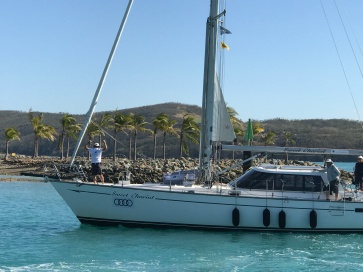 Sweet Chariot with Pilgrim ring in! 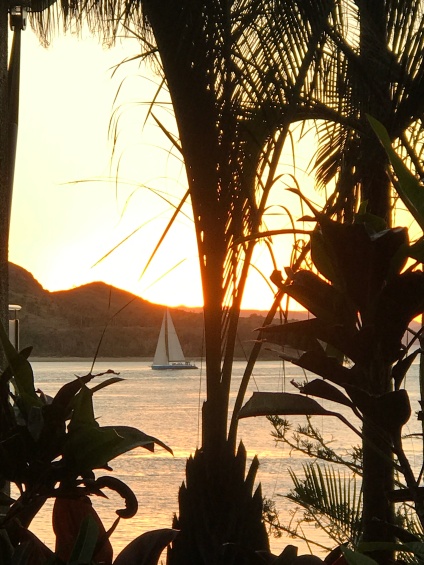 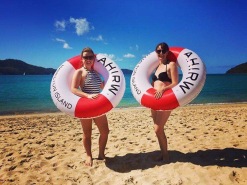 3 thoughts on “Returning to the Whitsundays”