Saturday and it’s a bit overcast and feels cooler today. One more practice session at 2 pm then Qualifying starts at 5 pm. In between, there are more historic racing cars,  Ferrari parade, the Porsche Carrera Cup, RAAF Roulettes, an FA 18 jet flyover and more Supercars. So much going on around the actual GP it’s hard to know what to watch or look for.

Awesome day, we got Club 15 upgrades to our general admission tickets which put us on corner 15, last but one corner before the grid straight. You can see from the shots how well placed we were and what a terrific view we had.

The support acts were great, but FP 3 showed some incredible speed from the new cars and all the teams looked fast, though Mercedes and Ferrari were breaking track records. Red Bull looked good by the end of Practice and Qualifying promised to be exciting.

Too exciting. With Mercedes and Ferrari vying for the top 4 spots, Red Bull and Torro Rosso close behind with Haas and Williams in Q3, we hoped for a blinder by Ricciardo who had been getting faster throughout. It was not to be as he crashed coming out of turn 14, red flagging the session on 8 minutes. When the session resumed, the grid was set with Hamilton, Vettel, Botas, Raikonen in the first four spots with Verstappen in fifth.

Pete and I headed back to our unit to cook BBQ dinner and have an early night to prepare for tomorrows HUGE Paddock Club day. 😄 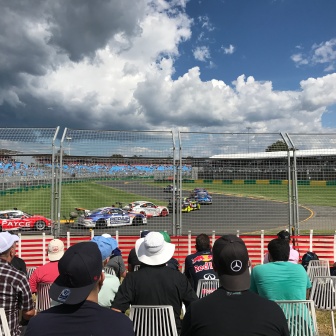 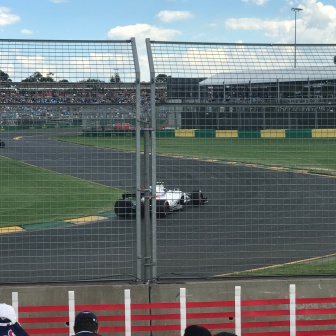